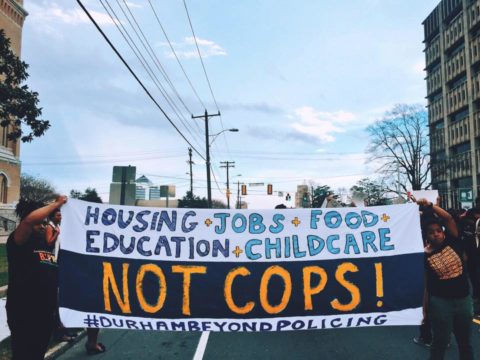 Policing is a system committed to Black death and disposability. It must end, and we must invest instead in community care, accountability, and transforming harm.

Yet on June 15, following two weeks of global uprisings prompted by the murder of George Floyd by Minneapolis police, and over 4000 public comments in opposition to Durham’s police budget, the City Council voted unanimously to spend nearly $70M of our resources on the police. That sum represents a 5% increase in the police budget from last year and 1/3 of the city’s General Fund.

At that same meeting, the Council approved $1M for the expenses and as yet undetermined outcomes of the Community Safety and Wellness Task Force, which they voted for last year following a proposal by Durham Beyond Policing. But the $1M was undercut by Council’s decision to cut essential resources to our city workers and larger community. The Task Force cannot work properly if the city defunds the very people it wants to keep safe.

City Manager Tom Bonfield reported that the city faces $12M in budget cuts due to the COVID-19 pandemic. For many city workers— who clean our streets, collect our garbage, and drive our buses —that meant their scheduled raises under the new Step Pay Plan were unfunded. City retirees face a 20% decrease in their health insurance funds.

For the police, the budget shortfall changed nothing. As part of their 5% raise, the police department will form a city-county gang unit, authorizing the police and sheriff’s departments to surveil and capture people they suspect to be gang members. The previous experiences of this city in the 2000s, along with studies of similar efforts across the country, demonstrate that gang units are set up for broad scale racial profiling and violence against Black people, with no benefit to public safety.

At the June 1 budget hearing, the Council and mayor praised Durham Police Chief CJ Davis for exercising “restraint” against the protestors gathered downtown, for setting a shining example of good policing. But choosing not to brutalize and jail protestors is not remotely the same as creating safety. When we can’t take for granted that police won’t incite violence, their commitment to safety is meaningless. Lest we forget, Chief Davis has many stolen Black lives to account for since her appointment in 2016. Among them are Kenneth Bailey, Jr., Frank Clark, Ondrae Hutchinson, and Shaun Christy, not to mention the untold stories of harassment of Black women and girls at the hands of the police. In 2016, Frank Clark’s partner, Jasmine Lloyd, said that Charles Barkley, the officer who killed Clark, harassed her since she was 12 years old.

A Black police chief does not make policing less harmful or anti-Black. Neither will anti-chokehold policies, anti-bias training, community policing, or other reforms.

Systems of care will not end anti-Blackness by themselves. But ending anti-Blackness has no hope under punitive systems rooted in fear, brutality, and wellness services, and first responders —medics, counselors, mediators—intervening to reduce harm, not to escalate and isolate. “Public safety” means systems of care on the front end and accountability through transformative and restorative justice practices at the back end.

“We keep us safe” is far more than a slogan. In just the last few months, our communities have been physically distant, but socially committed to our survival through mutual aid and grassroots networks of care. We keep us safe in ways that the police always promise, but never deliver.